Benefits of becoming a subscriber include:
– Save $$$ over regular single ticket price
– Five exciting plays at one low subscription rate
– Attend the evening or matinee of your choice
– Convenient ticket reservations by phone
– Advance notifications of all plays
– Get the best seats in the house

If you would like to increase your support for Theatre 40, please consider subscribing at a premium level!

To subscribe by mail, download and complete the Subscription Order Form and mail it to:
Theatre 40
PO Box 5401
Beverly Hills CA 90210

Refund Policy
– All purchases are non-refundable.
– Ticket exchanges for a different date are subject for approval based on availability due to limited seating and reservations.

In accordance with current LA County Public Health Department guidelines we have updated our policies on vaccinations and mask wearing. Please see below, get vaccinated, and protect yourself and others!

Theatre 40 vaccination and mask policies as of September 1, 2021

Vaccinations:
All Theatre 40 audience members and guests as well as volunteers, who attend our productions must be fully vaccinated and must present their official vaccination card (photocopy accepted) to the box office person when they arrive at the theater. Anyone who shows up at the theater to attend or usher but does not have their vaccination card available to show to the box office person will not be allowed to attend the performance and will be asked to leave. If you are not fully vaccinated or will not have received full vaccination by the date you wish to attend, do not reserve tickets until you have been fully vaccinated and have your card.

Mask wearing:
It is Theatre 40’s policy to adhere to The Los Angeles County Public Health Department Covid-19 guidelines. All vaccinated or non-vaccinated people, including volunteers and audience members, must also adhere to the dictated County guidelines. The Los Angeles County Public Health Department says all vaccinated and non-vaccinated people must be masked indoors and that policy will be strictly enforced at Theatre 40 at every performance and temperature checks will occur at the box office.

We thank you for your cooperation.

The Theatre 40 Season Subscriber package includes tickets to all 5 of our regular season plays. 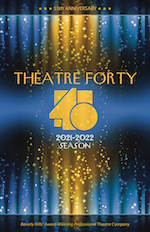 As Good As Gold

Three female writers create an action-packed macho screenplay with a super-stud hero. As they type, their script comes to life… and the women excitedly take turns playing the love interest. When their screenplay is finished, they realize in order to sell it, they can’t use three women’s names as the writer — hell, they can’t use one woman’s name! So, they use a man’s name and, in no time at all, it becomes the hottest script in town… leading to absolute chaos! As Good As Gold is a captivating, fun-filled comedy about show business and gender parity that also explores friendship, love, and life.

Welcome to Southie, a Boston neighborhood where a night on the town means a few rounds of bingo…where this month’s paycheck covers last month’s bills…and where Margie Walsh has just been let go from yet another job. Facing eviction and scrambling to catch a break, Margie thinks an old fling who has made it out of Southie might be her ticket to a fresh new start. But is this apparently self-made man secure enough to face his humble beginnings? Margie is about to risk what little she has left to find out.

Henrietta Leavitt explores a woman’s place in society during a time of immense scientific discoveries, when women’s ideas were dismissed until men claimed credit for them. Social progress, like scientific progress, can  be hard to see when one is trapped among earthly complications; Henrietta Leavitt and her female peers believe in both, and their dedication changed the way we understand both the heavens and Earth, as she takes measure of her life on Earth, trying to balance her dedication to science with family obligations and the possibility of love.

The Play’s The Thing

Turai and his collaborator bring a young composer, Albert Adam, on a surprise visit to a castle on the Italian Riviera with their prima donna, Ilona, Albert’s fiancee. The pointed and deadly barbs fly fast and furiously among this group of charming sophisticates. When Albert overhears his beloved being wooed in her boudoir, Turai tells him it is all a silly mistake, explaining to the besotted young man that the passionate scene was merely a rehearsal for a new play. To support his fabrication, Turai stays up all night to write a play, including the overheard love talk. The next day during a public rehearsal the suggestive dialogue is reborn as an innocent, harmless bit of thetre-play.